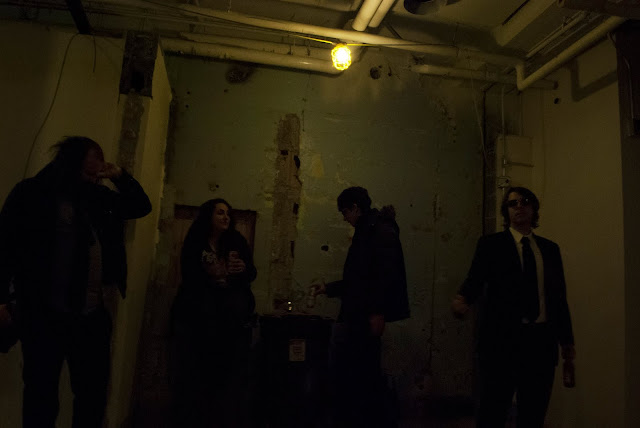 "An effortless mix of both visceral noise rock and haunting ambiance, a sound that is as angelic as it is satanic."
–AdHoc

"It’s refreshing that this year’s best metal albums have felt particularly bold, pushing the genre to new places... The second half of the year should be no less exciting—with great releases from Spectral Voice, Couch Slut, Sannhet, and more."
–Pitchfork

"The provocatively named Brooklyn band looks to the miserable spew of Unsane, Today Is the Day and Oxbow to stir its own, but its second album, Contempt, is not without perverse beauty, dripping from the sludge."
–NPR Music

"For as uncomfortable and uncompromising as this material can be, it’s also clever in an engaging way. Squirming underneath the distortion are tons of earworm melodies and hooky textures... That’s Couch Slut’s thing, really: no matter how loud or cringey things get, you can’t stop listening."
–Stereogum

As AdHoc states, the song is "as angelic as it is satanic" – hauntingly beautiful and heavy as hell. The song veers from sludgy tar-pit rock of the Unsane school, into cruising, bittersweet Sonic Youth radiance.

An exclusive premiere of the entire Contempt album is set for late Tuesday night on WFMU's My Castle of Quiet show. Tune in live at midnight Tuesday night/Wednesday morning to hear the album in full. The show will be archived and available to stream online at wfmu.org starting Wednesday.


Couch Slut is poised to set sail on a short tour of the US and Canada, kicking off with a hometown record release show on August 31st at Saint Vitus in Brooklyn.

Gilead Media owner Adam Bartlett says this: "As a label that releases a fair amount of black metal, doom, and other varieties of 'extreme music,' the concept of visceral and transgressive art is nothing new to Gilead Media. But Contempt may stand as one of the most vicious and unnerving releases in the label's history."