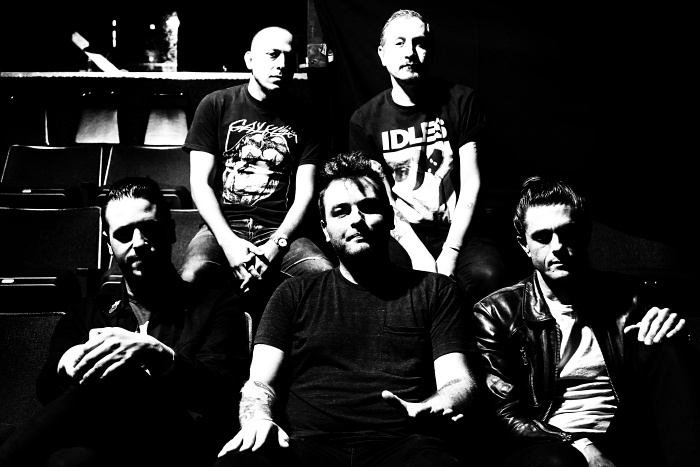 "...the controlled chaos of Discordance Axis meets the spazzy-ness of Retox..."
-No Echo

Take a listen to the entire Contemporary Sickness EP, via No Echo, here.

Deaf Club is a savage sound bath dripping with sardonicism: a blastbeat-centric hardcore punk assault channeling crust, thrash, and grind (un)sensibilities. Succinct  pauses, surreal frequencies and effects, breakneck pace and sharply hurled vocals characterize the band’s aesthetic, which seems as though it is rooted in a sort of nasty-sound-meets-highbrow-message ethos. Fueled by the onslaught of society’s insanity and driven mad by tinnitus, Justin Pearson (The Locust, Dead Cross, Planet B), Brian Amalfitano (ACxDC), Scott Osment (Weak Flesh), Jason Klein (Run With The Hunted), and Leo Ulfelder (Fissure) approach music as an opportunity to confront our collective sicknesses. We’ve got to try to listen, lest we all frolic headfirst towards the bright side of death, dragging this pillaged planet down with us. So whether you think the music is a radical disruption to the airwaves or just headache-inducing noise, you can feel free to tell them the brutal truth-- they can't hear you anyway.

The Contemporary Sickness EP will be released October 4th digitally as well as on limited edition, specially printed vinyl through Three One G Records. Mixed and mastered by Brent Asbury (who has worked on albums by bands like Retox, Panicker, Dead Cross, Planet B). Vinyl/cover art by Jesse Draxler (who has done artwork for Nine Inch Nails, Daughters, The New York Times, Dita Eyewear, and MCQ Alexander McQueen, among others). Layout and design by Bran Black Moon. Pre-order the EP, here.