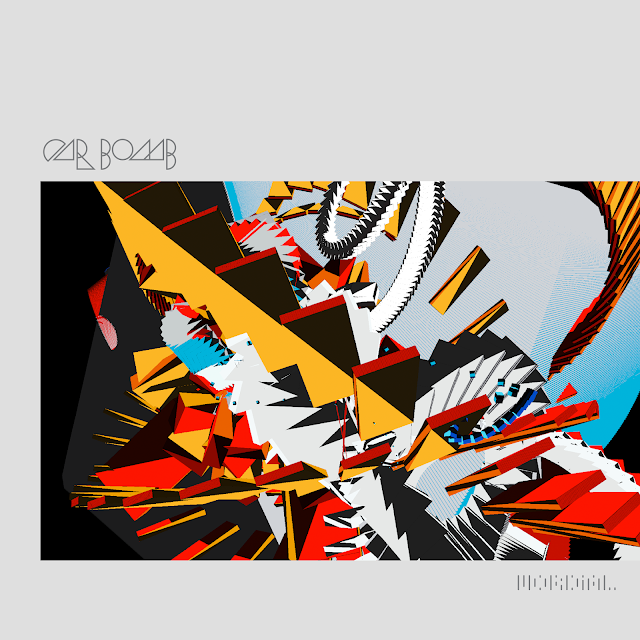 Mordial, the fourth album by Car Bomb, is out today.

Punishing, baffling, and beautiful – Mordial sees Car Bomb expand its supra-Meshuggah math-metal with moody hooks, shoegaze textures, Satriani-shred, and much more. Guitarist Greg Kubacki has stated, "With this particular record it really feels like the gloves came off, and that we were free to experiment with whatever we wanted to.”

Mordial was recorded by the band in Brooklyn, New York, at Silver Cord Studio (Gojira), mixed by Nolly Getgood (Periphery, Animals As Leaders), and mastered by Ermin Hamidovic.

"The new Car Bomb song digs its verses straight out of the 'The Great Southern Trendkill'’s apocalyptic sludge and launches its chorus directly into White Pony’s airspace. Shit is sick."
–Stereogum

"'Mordial' represents progression and innovation for a group already more innovative than the vast majority of their peers, stepping into the truly avant-garde by actually aiming to redefine avant-garde altogether... Ultimately, Car Bomb represents the blurring line between man and machine, between the authentic and the artificial, between simulacrum and truth."
–Invisible Oranges

"'Mordial' is a testament to [Car Bomb's] ever-evolving nature as well as their preposterous weight, imploding in on itself while both scrambling your mind and kicking your teeth in. The Dillinger Escape Plan may be no more, but this music is the future!"
–MetalSucks

"An experimental chunk of riffs and noises that's sure to completely and utterly blow your mind."

"A devastating show of death metal-leaning mathcore. Few bands have quite as violent a sound as Car Bomb, and 'Mordial' is another finely crafted album to tack on their discography."
–Exclaim!

"The mathematical wildness of this album is bound by a greater, more epic and almost orchestral sense of being... It’s the vicious metal record we all wanted, and a mile more beyond that... All hail 'Mordial'! It’s the one."
–Everything Is Noise

"The progressive New York hardcore unit have carved a career out of one of the most spastic sounds in metal, and Mordial brings that approach to its most honest and compelling fruition yet, shifting through time signatures like gears and juxtaposing closed-fist riffage against pops of irresistible melody. In our dystopian Dillinger Escape Plan-less future, Mordial is a ray of hope, especially for those of us who enjoy counting polyrhythms in the pit."
–Free Williamsburg

"It further cements their place as one of the most creative, eccentric, and valuable active bands in the modern extreme metal scene."
–Heavy Blog Is Heavy

"Where else are you going to find these heavy, technical sounds combined with the detached mescaline trip of 90's alternative and shoegaze? It's like Meshuggah collided with Sonic Youth."

"Dissonance, melody, brutality and groove... The constant changes make for an unpredictable album, but also a satisfying one."
–Heavy Music HQ

"The technicality which comprises 'Mordial' is jaw dropping even if you’re used to the unforgiving carnage which the Long Island outfit can provide... Car Bomb haven proven time and time again that they are in a class of their own and this release has only cemented that fact even further."
–Distorted Sound

"There are so many moving parts to what Car Bomb are doing that it is sometimes difficult to pin down exactly what is going on, but by the time you reach closing track ‘Naked Fuse’ your brain is so scrambled from the pure excellence of the album, the sounds just wash over you in a kind of heavy acceptance."
–Astral Noize
at 9:59 AM