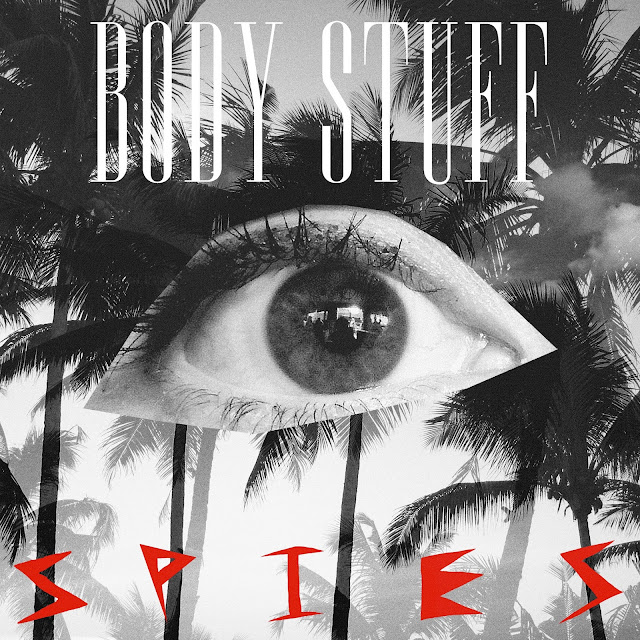 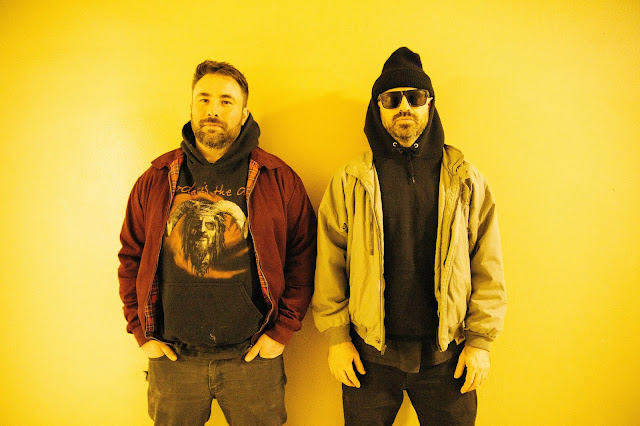 Stream the single and pre-order the new EP, here:
https://bodystuff.bandcamp.com/

Stream the song on Spotify, Apple Music, and other major platforms, here:
https://ffm.to/bodystuff

Body Stuff's Curran Reynolds says, "'Spies' is one of my favorites. It's a song about how the whole world is your home. This theme has run through all three Body Stuff EPs."

Body Stuff is the duo of Curran Reynolds and Ryan Jones. Reynolds, the songwriter and vocalist, began the project in the early part of this decade, when both he and Jones were members of Today Is The Day.

Reviews of the first two EPs singled out a few aspects of the Body Stuff sound. On the surface, there were crooning vocals, simple hooks, and an earnest spirit, nodding to the rousing rock songs that filled late-‘80s FM radio dials. Underneath, something heavier: programmed drums and thick guitars conjured industrial-metal power. And deeper in the mix was a dreamlike ambience that evoked the places the music was conceived – namely, the streets of New York City (the debut EP) and a lake in rural Maine (Body Stuff 2).

Featuring the most highly developed music the duo has created so far, Body Stuff 3 consists of five, intense, radiant anthems that take the Body Stuff style to the next level. The EP was recorded and mixed by Jones and Reynolds at Jones’ studio, Growlhouse, in Queens, NY, and mastered by Brad Boatright at Audiosiege (Torche, Full of Hell).

The "Spies" single artwork was created by Curran Reynolds and Brandon Gallagher. 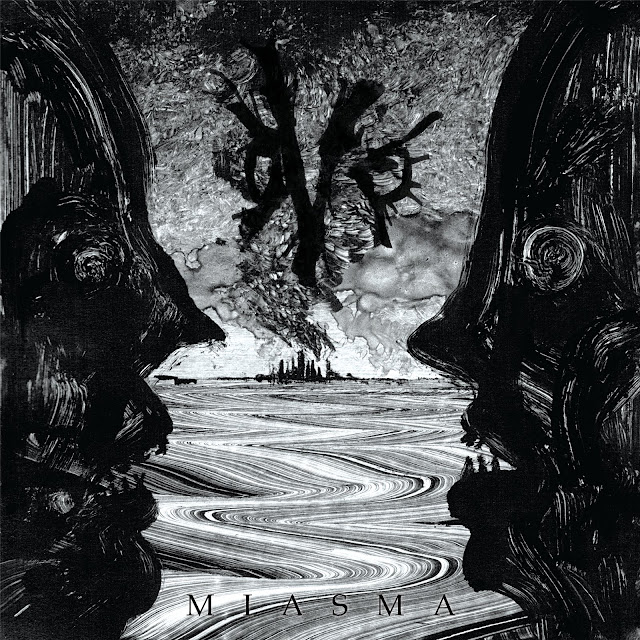 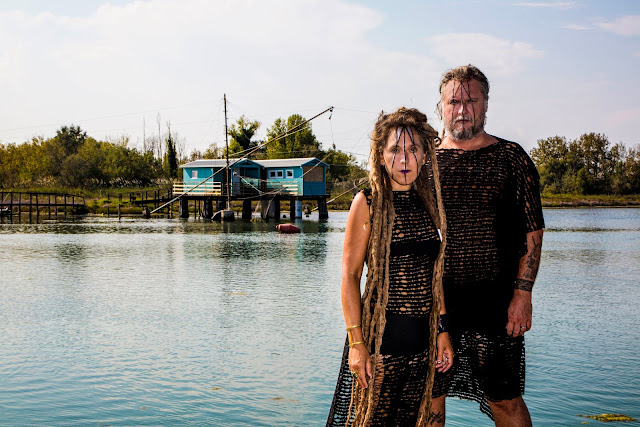 Celebrating its 20th anniversary in 2020 – with over 1,000 shows played, nine studio albums released, and a slew of splits and live recordings – OvO is a singular force in the underground. With a mix of electronic and acoustic instruments, founding members Stefania Pedretti and Bruno Dorella take influence from the likes of Swans and Diamanda Galas, pounding out a theatrical and harrowing mix of what Stereogum has described as "music – rhythmic noise, really – owing equal debts to extreme metal, noise rock, industrial music, and dark electronica." Pitchfork has compared Pedretti's vocals to Yoko Ono, and Decibel Magazine has hailed the band's sound as “a David Lynch dance party.”

Always on tour, OvO's fiercely independent ethos and grinding live schedule have earned the band a rep as "the Jucifer of Europe," with a worldwide fanbase expecting nothing but the most daring and innovative music. OvO has performed at festivals on nearly every continent, and has toured extensively with the likes of Lightning Bolt and Zu.

Embarking now on its worldwide deal with Artoffact Records, at the dawn of its 20th anniversary, OvO presents a thrilling new piece of work: ninth full-length, Miasma.

Featuring guest appearances by members of Årabrot, The Soft Moon, Gnučči, and more, Miasma sees OvO continue down its path, mixing tribalism and futurism by way of radical cross-contaminations of sounds, rhythms, and genres.

As with previous albums Abisso and Creatura, the Miasma writing process began with loops and patterns that Dorella proposed to Pedretti. Along with beats bashed out on his minimal drum kit, Dorella teamed up with friends to create samples – collaborators included Eraldo Bernocchi (Sigillum S), a034, Ripit, Paolo Bandera (Sigillum S), and Matteo Vallicelli (The Soft Moon). Pedretti then chose her favorites, restructured where necessary, and played and sang over them.

Dorella offers this statement about the album:

"A contagious miasma, coming from the most remote swamps, is surrounding cities and villages. It can be an alien disease, like in a sci-fi movie, or it can be some deeper fear caused by whoever wants to control us, like in real life. Freaks, queers and outsiders will be the first ones to realize and fight it. But still: expect mutations. We are trying to represent how close science-fiction and reality are nowadays, and how close to us the miasma really is..."

Miasma was recorded by Ivano Giovedì and Franco Beat at secret locations across rural Italy. The album was mixed by Giulio "Ragno" Favero and mastered by Andrea De Bernardi.

Photo of OvO, by Erica Schneider
at 5:57 AM No comments: 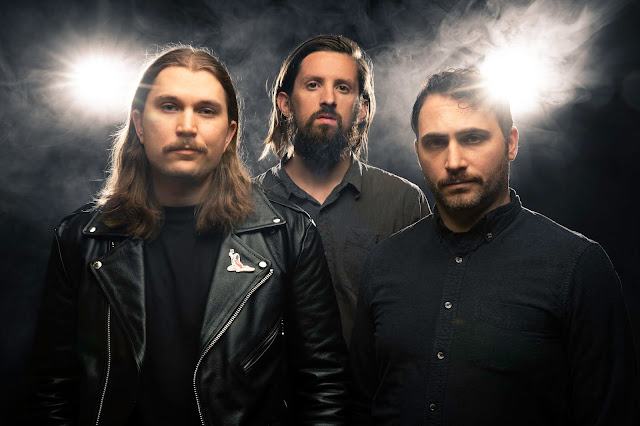 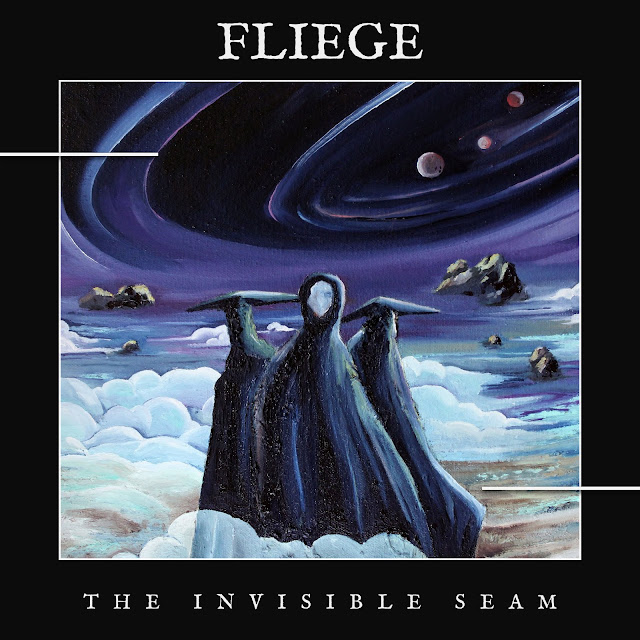 Founded in 2016, Fliege began as an inside joke – a metal band based solely upon David Cronenberg's 1986 remake of The Fly. The duo of Coleman Bentley and Peter Rittweger wrote and recorded Fliege's self-titled demo for a laugh, but seeping through the absurdity was greatness. Decibel called the six, Jeff Goldblum-ridden songs, "infectious," and proclaimed: "Every once in a while, a band comes along, transgresses all genre boundaries, and cuts a demo that stands as a genuine demonstration of a singular sound."

Bentley and Rittweger's self-appointed tags, like "blackened hair metal," adequately described some of the early Fliege tracks, but there was more to the story, even from the start. On the demo, blackened screams and '80s metal riffage are propelled by industrialized drum programming, then laced with the kind of melancholy that points to post-hardcore roots. It is a collision of styles that might seem jumbled if it were not delivered so convincingly, and with such hooks.

With the upcoming The Invisible Seam, Fliege has graduated from The Fly to more serious cinema: Ingmar Bergman's existential 1957 masterpiece, The Seventh Seal. Bentley states: "Our demo tackled The Fly, but we soon realized we had to expand from that universe in order to have anything new to say. So for this one, we chose Bergman’s The Seventh Seal, the story of a Swedish knight returning home from the Crusades to find his homeland ravaged by the plague. He challenges Death to a game of chess, staving off his advances long enough to make it home one last time – questioning mortality, the meaning of life, and the existence of God, while trekking across a dying countryside. Within the framework of that film, we tackle the nihilism of modern life and the paradox of depression – not wanting to live but not actively wanting to die."

Musically, the album soars beyond its predecessor. The Invisible Seam sees the debut of third Fliege member Chris Palermo on synth. It also sees Bentley's clean vocals take a more central role. Every aspect has been turbo-boosted: the heavy is heavier; the heartfelt, more heartfelt; the grandeur, grander. In discussing the musical direction, Bentley references Immortal, Nine Inch Nails, Judas Priest, Cloud Rat, and John Carpenter, among others. The Invisible Seam is all that and more. An epic endeavor, in sound and in concept, it is an example of a band transcending its own beginnings to become something awesome. 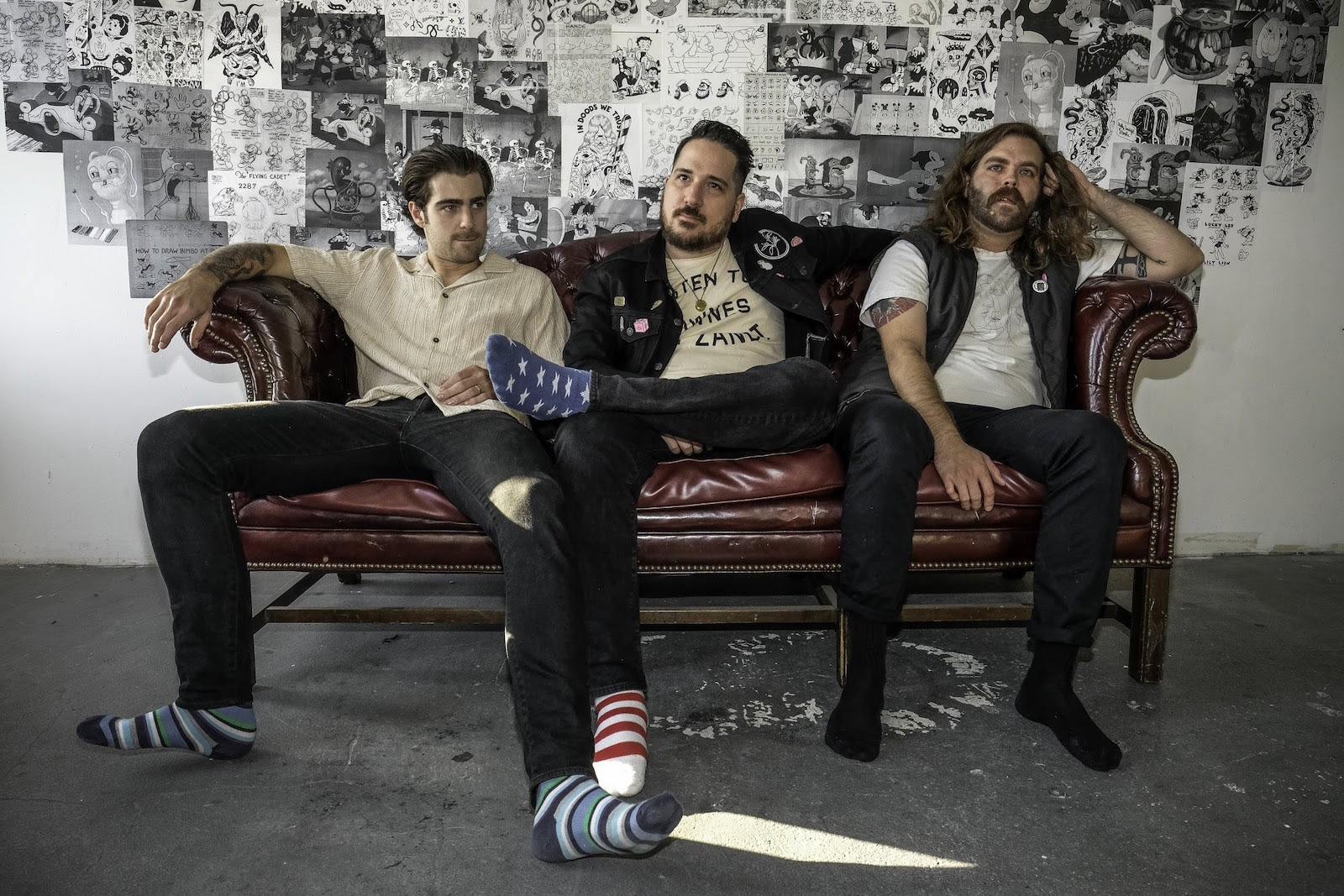 Bad Looks was founded in Los Angeles, CA in 2017 by vocalist/guitarist Alessandro Pulisci (At Our Heels) and drummer Denny Connolly, and was shortly thereafter cemented with the addition of bassist/vocalist Lafayette Kartchner. The trio released their first self-titled EP in 2018. More recently, Bad Looks contributed a track from this debut EP to the soundtrack of 2019 horror film, Bliss, which also features the likes of Doomriders and Electric Wizard, among others. The band plays heavy punk with a rock and roll swagger in the vein of Mutoid Man, Metz, Every Time I Die, and Queens of the Stone Age.

At its core, EP II focuses on themes of post-modern existential dread and social media’s influence on culture, and musically sees the band expanding their horizons into more melodic and simultaneously ferocious territory. 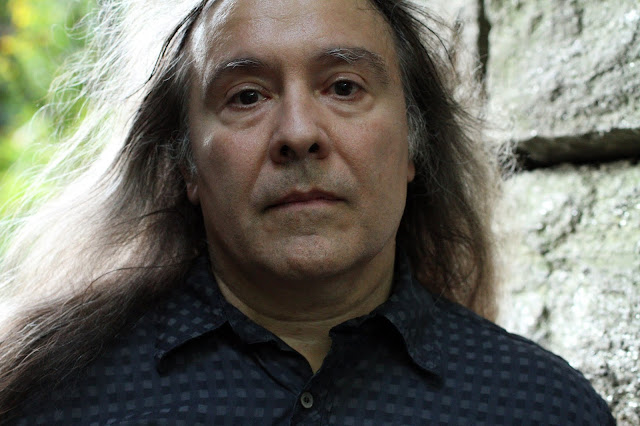 "Heavy, in the abstract sense of the word... Full of creative freedom..."
–CVLT Nation

"A music producer who helped launch Whitney Houston's career and win Herbie Hancock a Grammy... Martin Bisi is a Brooklyn pioneer who brought avant garde hip hop and indie rock production into Gowanus in the 1980s and has been creating music there ever since."
–Patch

The album is split between "Summer Solstice" and "Winter Solstice" sides. "I started thinking about solstices, visiting Norway in the early summer, where the power of the summer solstice is more pronounced than in New York," says Bisi. 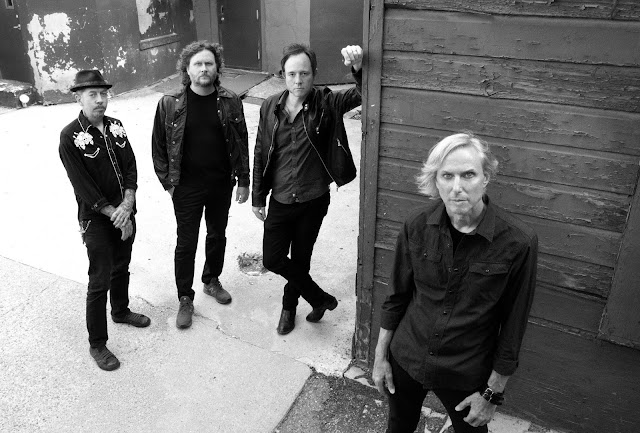 "[Saturday Night Massacre] sees Live Skull embracing their gothy side, which works well with frontman Mark C‘s more seasoned voice. And despite a bit of a warmer sound, Live Skull haven’t let up on the intensity one bit."
–BrooklynVegan

"A likeable swagger, solid tunes... the sense that this Reagan era band have reawoken to an all too familiar political climate. Live Skull have recaptured some of the scuzzy energy that powered them back in day, which is more than can be said for some of their contemporaries."
–The Wire


"'Saturday Night Massacre' would be a lesser record if it only wanted to evoke memories, of Downtown and of the band’s past excellence. The happy news for folks who still love those mid-1980s Live Skull records is that this new LP is pretty good, and it wants to move the band’s sound forward... In our current conjuncture of virtual vapidity and superficial renditions of 'edgy' affect, Live Skull’s new record, thick with real feeling, is a welcome event."

"'Saturday Night Massacre' seems to be an album-length diatribe about the current political climate. The narrative voice provided by vocalist and founding member Mark C isn’t based in youthful outrage, but instead in a 'with-age-comes-wisdom' sense of knowingness... Musically, the approach has also been streamlined. In the past, Live Skull might have been lumped together with Sonic Youth, but this album might be the closest they’ve ever come to really sounding like them..."
–Burning Ambulance

Together with Sonic Youth and Swans, Live Skull defined post-No Wave NYC rock in the '80s. Its sound was influenced by British post-punk – Joy Division, Public Image Limited – but was located squarely in the depths of Downtown Manhattan. Dual guitars chimed and slashed; basslines drove; drums pounded and hypnotized; male and female vocals intertwined to conjure serial-killer imagery to match the intensity of real life in '80s Gotham.

The first new album since 1989, Saturday Night Massacre is an astounding comeback – gentle, ominous, hard-edged, all at once. "The reanimated crypt of Live Skull spawns a new brood of cheerful tunes sure to make your blood boil," frontman Mark C invites. 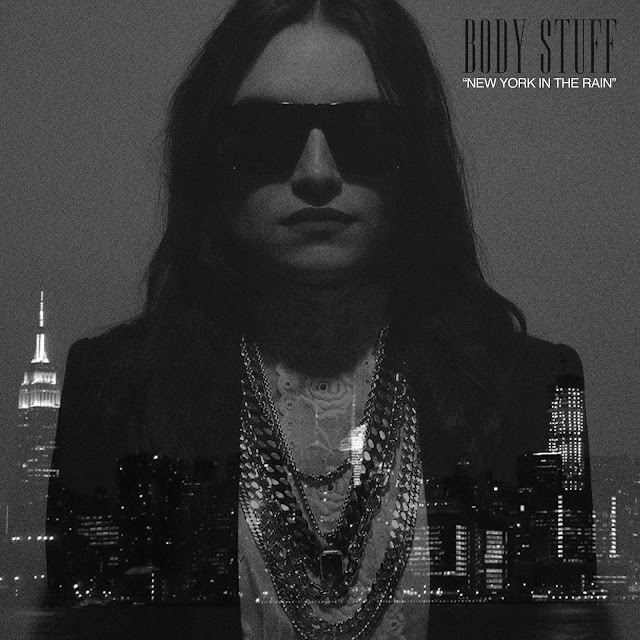 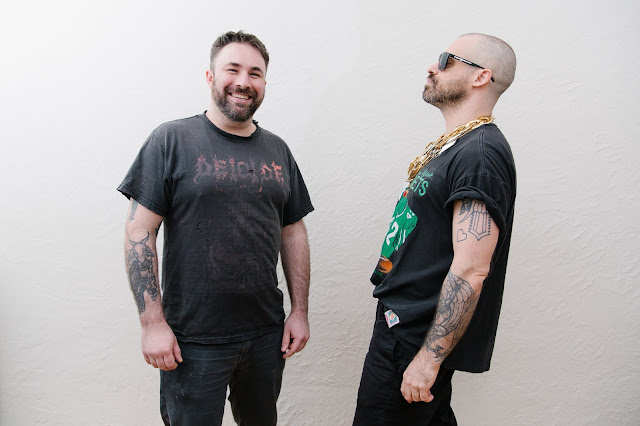 "New York in the Rain," the first single from Body Stuff's upcoming EP, Body Stuff 3, is out today.

Stream the song on all major platforms, here:
https://ffm.to/bodystuff

Body Stuff's Curran Reynolds says, "This song looks back on 20 years of life in NYC – the lowest lows and highest highs and the ways we dance between those two extremes. The gutter and the penthouse."

The video was directed by Reynolds and Brandon Gallagher. The two are partners in The Chain, the multi-faceted company responsible for releasing Body Stuff 3. The video stars Alaina Alvarez as "The Queen of New York" and Gene Fowler as "The King of New York."

Body Stuff is the duo of Curran Reynolds and Ryan Jones. Reynolds, the songwriter and vocalist, began the project in the early part of this decade, when both he and Jones were members of Today Is The Day.

Reviews of the first two EPs singled out a few aspects of the Body Stuff sound. On the surface, there were crooning vocals, simple hooks, and an earnest spirit, nodding to the rousing rock songs that filled late-‘80s FM radio dials. Underneath, something heavier: programmed drums and thick guitars conjured industrial-metal power. And deeper in the mix was a dreamlike ambience that evoked the places the music was conceived – namely, the streets of New York City (the debut EP) and a lake in rural Maine (Body Stuff 2).

Featuring the longest, most highly developed music the duo has created so far, Body Stuff 3 consists of five, intense, radiant anthems that take the Body Stuff style to the next level. The EP was recorded and mixed by Jones and Reynolds at Jones’ studio, Growlhouse, in Queens, NY, and mastered by Brad Boatright at Audiosiege (Torche, Full of Hell).